The Disability Royal Commission has been running for almost two years (of a three-year Royal Commission) without proper protections in place for survivors and witnesses to tell their stories.  (See our previous November 2020 blog update.)

As it stands, people who provide information in a private session can have their privacy protected, but anyone providing written submissions to the Disability Royal Commission is only guaranteed confidentiality until the Royal Commission concludes in April next year. For many survivors and witnesses, this a barrier to telling their story.

The Government made a commitment to introduce legislation to make it safe to speak to the Disability Royal Commission in the March sitting of Parliament, but the sitting is now next week and they have not yet produced a draft of the legislation needed.

We need to hold them to their word.

You can write your own letter to the Acting Attorney-General or call her office via: senator.cash@aph.gov.au DANA has heard from many advocates around Australia supporting and engaging with people to tell their story that privacy and confidentiality concerns have emerged as a key barrier:

“The laws around Commissions and Privacy are complex, advising someone on the best way to share their story is challenging (even with legal support)”

“The main problem is the lack of assurance of confidentiality. It comes up as a major issue for every single person I have assisted so far. It is also the main reason given for people who ultimately decide that while they have experienced trauma or abuse, they don’t feel safe telling the Commission about that until the legislation is changed.”

“People do not want to tell their story if it cannot be made confidentially.”

“the messaging from the legal side is providing an obstacle in itself for people to put in submissions… it is a real disincentive for people.”

…“encouraging people to engage with this process and then giving them a lot of information that is scary. It is like saying, come and do this but it is subject to freedom of information, and we do recommend you check with someone legal just in case you get yourself in a lot of trouble. That messaging makes someone teetering on whether to engage with it think ‘this sounds scary’ and they are just not going to do it just to be cautious, rather than ‘I will do it and I will get it checked.’”

If [the confidentiality issues] gets solved right at the end of the commission how is there any opportunity to respond to that? That would free up people to feel safer to provide that information, yet it would be too late to put it into the report, I am very frustrated around that issue.

“Confidentiality is a big problem.” 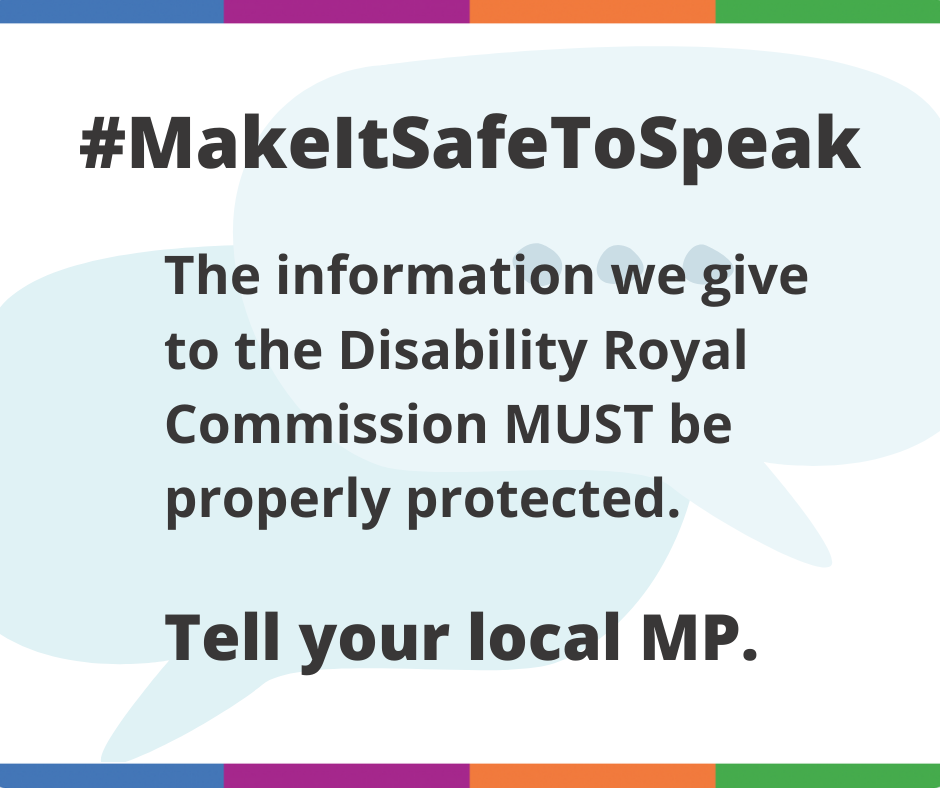 The issue of confidentiality protections has been identified as particularly problematic for people from multicultural or non-English speaking backgrounds and for Aboriginal people living in rural and remote areas:

“…and the messaging from the legal side is providing an obstacle in itself for people to put in submissions… For CALD people and First Nations people who imagine cost and all those things involved in it, it is just a hinderance…The messaging for people was that they are being advised that all submission go through a legal process.”

“There’s a sense of shame if someone has been abused by their stepfather, the mother may know.  But there was a sense of shame in one family of bringing this issue up and going to the Royal Commission and she didn’t want it out in the public.  She’d been through a process before.  But it’s being able to say to families that this is completely confidential and to be able to guarantee that and at the moment you can’t guarantee that, can you?… I think [amending legislation is] really important and it will help people come forward.”